Donna Cravotta, a friend of mine, was there on 9/11. She worked in downtown New York the day this tragedy occurred.  This day is etched in her mind and each year she wears these shoes to remind her of the horrible events that occurred that day but also to remember to love and help each other.
Here is her story of remembrance. 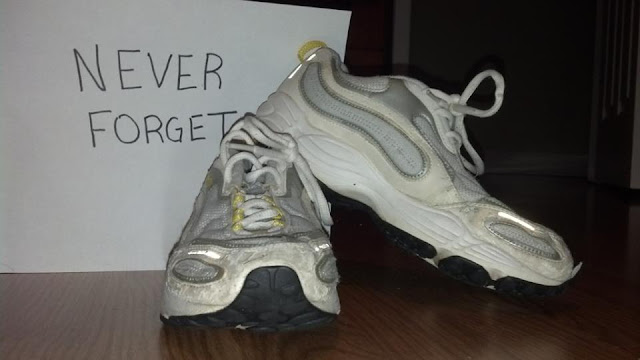 It is September 11th. I cannot believe that it's been 17 years since the unthinkable happened and our world was changed forever.

There are so many that lost so much more than I did that day. I was born and raised in NY and grew up in the shadow of the World Trade Center, those buildings were in the fabric of our lives, so many events happened in and around them. My sister worked across the street at Merrill Lynch and I remember going to work with her as a young child and watching them go up. My brother-in-law works for the Port Authority and he would take us up on the roof. I rode in many bike tours that ended victoriously in the plaza between the buildings. I even worked there for 2 weeks on a temp assignment on the 102nd floor. They were just there, every time I saw the skyline of the city I love they took my breath away.

September 11, 2001, was a magnificent day, the sky could not be more blue, the perfect NY late Summer/early Fall day. I was on my way to work and listening to Howard Stern on my walkman – I honestly thought he was joking as he reported that a plane hit the World Trade Center…. then I looked up and saw that plume of smoke that is etched in the memories of all who saw it. I got off the bus and the next thing I remembered was I sitting at my desk and trying to sign on to my computer.

I remember the day so clearly, but there are chunks of time that are just gone. We all watched the events of the day unfold in a conference room and one thing I will never forget is the expressions on the faces of my friends and colleagues, eventually, we realized that we needed to do something, make sure everyone was OK, get home to our loved ones.

At the time I lived in Riverdale, which is in the Bronx and as I realized I was going to need to walk home in my very pretty, but very impractical shoes. I ran out to Sports Authority, it was mayhem, I would have bought a bike or a scooter, but they were gone. So I grabbed a pair of sneakers and as many socks as I could buy – as I walked back to my office I handed out socks to people in the street.

These are my September 11th sneakers and my remembrance ritual every year is to wear these sneakers and wish all good and positive things for the many, many people that lost their lives that day, their families and loved ones. The first responders with on-going health issues and the kids that lost or never met their parents. I am wearing them right now.

There were a group of my co-workers all walking in the same direction, we waited for a colleague’s wife who was walking uptown, she worked in Tower 1, but was fortunately late to work, it was election day and she voted that morning. It was incredibly eerie as we walked through Central Park, it was packed with people, but very very quiet, no one was talking, there was no traffic, no buses, no taxis, no helicopters. The hustle and bustle was gone. I was very grateful that I was not alone.

For the next few weeks, NY was a strange place, everyone was polite. I love my fellow NYers and they are kind and good people, not necessarily polite and that was off-putting. I was secretly relieved when everyone got their attitude back…..

About a month later my son was conceived, over the next few months, I learned that seven people that I worked with were pregnant and we were all due mid-month between April and October. Coincidence, maybe… I did not really think about it, I was happy, my pregnant friends were happy, all the babies were healthy and well. But as each year goes by I think about this and I know these kids, and now so many more as my son grows up, they are special… A few years ago I started to think this was not an accident, we are repopulating, replacing special people that were taken violently and too soon. Who knows for sure, but it makes me smile and restores hope. I know I am keeping an eye on those born in the year 2002.

Today and every day, hug your kids, tell your friends and family that you love them and if you happen to be in NYC look up and remember…..

Thanks for allowing me to share and please be mindful of your social media posts today – let’s just wait until tomorrow to market our businesses and sell our stuff. I would love it if you would share your stories of remembrance too.