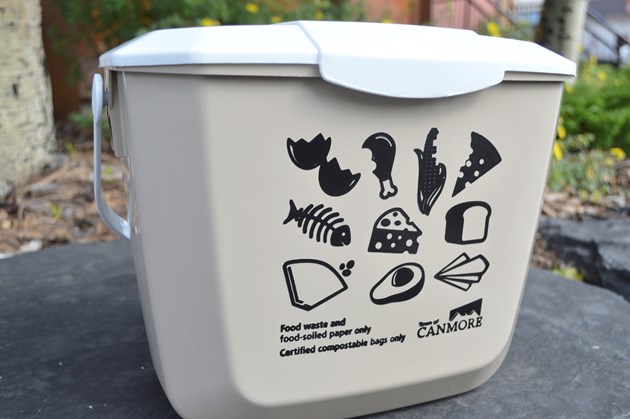 CANMORE – Canmorites can now pick up residential compost bins before the pilot project officially kicks off.

A new accessory on the Civic Centre counter, the eight-litre kitchen bin can be picked up at several locations over the next couple of weeks including the Civic Centre, the weekly Canmore Mountain Market on 7th Avenue and grocery stores in the community with the project officially starting Sept. 3.

"Food waste programs for municipalities are part of the norm," said Amy Fournier, Climate Change Specialist for the Town, who previously worked with the City of Vancouver sustainability group.

"There has been lots of enthusiasm, lots of community members are engaged on it, it's been fantastic. People have been waiting for this for a long time."

Introduced to Canmore as a result of community interest and pressure, the $2.9 million pilot project will be here a year earlier than expected after Canmore council made the decision in April to transfer $51,000 from the waste operating budget to the recycling operation budget to pay for the cost of sending the organic material to Banff for 12 months.

Benefits of moving up the residential pilot program were outlined in the staff report, which included moving the community sooner towards achieving the Town's waste diversion goals, per Environmental Sustainability Action Plan.

Partnering with the Town of Banff, which has been successfully running its compost program for more than 10 years, the Town of Canmore will be sending its food waste 24 km west where it is then sent to a composting facility in Strathmore, Alta.

An estimated 500 tonnes of organic waste will be diverted from landfills from residential homes per year with the action plan target to reduce the .60 tonnes of garbage per person per year to .45 tonnes by 2020.

"We want to divert food waste from the landfill – it is the biggest component of our waste and we are diverting a significant waste," Fournier said.

Working with the program as a climate change specialist, Fournier explained food in the landfill takes years to decompose and ends up releasing methane emissions which is considered approximately 25 times more potent than carbon dioxide.

"It's a great way for me to launch into my role and launch into the climate change action plan," Fournier said.

"This is a significant and tangible program to help [achieve goals] ... This will help us with our greenhouse gas reduction target goals which helps mitigate climate change."

The Town of Canmore has a list of items accepted on the website including meat, fruits and vegetables, baked good, bones, fruit pits and rinds, coffee filters, tea bags, small amounts of cooking grease, paper towels and pizza boxes.

Items not accepted that Fournier wanted to note is biodegradable bags and take-away cups, even if made of paper on the outside, the cups often have an interior plastic lining meaning it cannot be composted or recycled.

"If in doubt, throw it out," Fournier explained.

"We have these neighbourhood bins so it is a community effort – only putting in food and food soiled paper – and if someone dumps plastics, it ruins the effort for everyone. It happens with recycling as well but if someone comes in and dumps in their garbage it will have to go to the landfill instead and it ruins the effort of other folks."

For more information visit the Town of Canmore website.