Resorts have been able to stay open much longer than normal 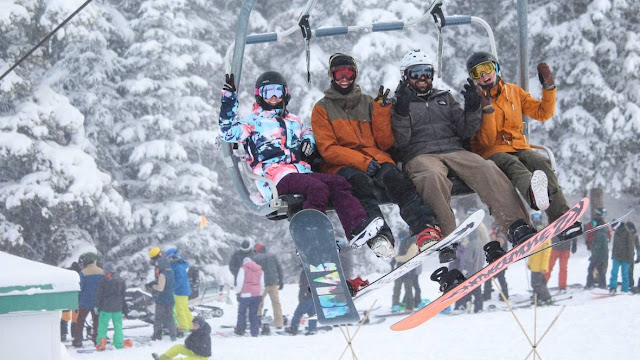 Skiers get ready to hit the slopes at Mt. Norquay. A long winter has been great news for Alberta ski resorts. (Luke Sudermann)

Winter has seemed to drag on this year in Alberta, with record snowfalls stretching well into spring, and many people growing sick of the frosty weather.

But for those that make a living in the province's tourism industry, the months of snow are pure gold.

Matt Mosteller with Resorts of the Canadian Rockies said this season is one for the record books, and snow is still coming down at all the big resorts.

"It was a powder pleaser," he said. "It really put a smile on everyone's face ... sure there are some that want spring to come, but you know what, while we've got this great snow, it's just great."

Fernie has received more than 1,100 centimetres of snow so far this season, and Nakiska, which was slated to close April 15, has added two three-day bonus weekends until April 29.

Mosteller said he knows people are tired of the weather, but said it's a bit warmer for those that head west.

There has also been a trickle-down impact on businesses like hotels, restaurants and retailer shops.

"April is a little bit busier than it generally is, because of all this great snow," said Nancy DaDalt with Banff Lake Louise Tourism.

"The bowls at Lake Louise are packed full of snow, Norquay is open until April 16, Sunshine has something going on every single weekend. So there's no reason not to come to the mountains. And if you don't want to ski anymore ... there's tons to do, just get outside and have fresh air."

DaDalt said it's not only skiers that should be excited — there are plenty of art shows and food festivals to enjoy in the region in April.