We make sure this does not happen to you:: Man fInds he does not own his backyard

3 years after moving in, homebuyer can finally call backyard his own 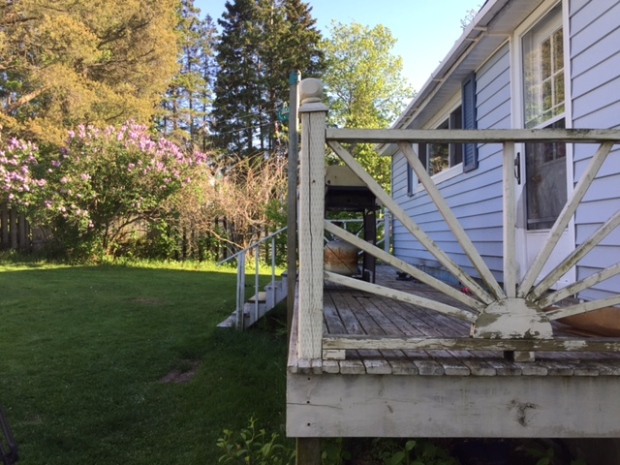 'I'm just glad I can move on,' says Nova Scotia man who discovered someone else owned parts of his property

Nearly three years after settling into his first home, a Nova Scotia man can finally enjoy his backyard knowing that he actually owns it.

Ryan Manning of Salmon River has spent the past nine months trying to figure out how he bought a house only to discover its backyard, shed and part of the deck technically belonged to someone else.

"[It] feels 10 times better to know that something that's been going on for so long has finally come to a resolution and one that I can live with."

Manning bought the duplex — a foreclosed property at 8 Miller Rd. outside Truro — in September 2014 and moved into the fixer-upper.

Last fall, a stranger named Cory Wood knocked on his door and told Manning he didn't own the backyard, the shed or part of his deck. Wood offered to sell it to him.

Manning was shocked because the property was fenced and the listing's real-estate agent had told him the fence was his boundary. The original listing also included a picture of the backyard. He was even given the keys to the shed when the purchase was finalized.

But when Manning checked, he learned the house and backyard were two separate parcels of land and Wood did indeed own the backyard.

Manning didn't have the money to buy the land from Wood and spent six months trying to get help from everyone who was involved in the purchase, including the listing agent and the law firm. With no result in sight, he turned to CBC News.


After CBC News contacted Patterson Law earlier this month, the firm worked with Manning and ReMax Fairlane Realty to purchase the property from Wood and transfer its full ownership at no cost to Manning.

The amount paid has not been disclosed. Other associated fees were also handled by the law and real-estate firms.

On Wednesday, Manning signed documents and the agreement was finalized.

"I am unbelievably happy about that," he said. "I'm just glad I can move on. I don't have to have this burden anymore in my life."

"There were many errors that had to occur for this to happen," she wrote in an email to CBC News.

"I would like to offer one great takeaway lesson for buyers of foreclosed properties or all properties for that matter: it is always in the buyer's best interest to have a surveyor's location certificate prepared before closing their transaction."

At the time of the purchase, Manning's lawyer recommended a survey but indicated in a letter that a title insurance policy was an alternative.

Manning opted for the insurance, but when the trouble started he discovered the policy only protected the lender.


Manning isn't the only person to encounter the same problem with the property. Wood also thought he'd bought it complete with the backyard only to find out later he hadn't.

Wood purchased the property from Joan Brundin in 2010. She thought she was selling him the entire property and he thought he was buying all of it.

Months later, however, it was discovered only the piece of land containing the house had been transferred to Wood. Brundin subsequently signed over the backyard property to Wood for one dollar.

It is unclear whether anyone informed the bank of the situation.

The bank subsequently foreclosed on the property containing the house seemingly unaware its mortgage only covered the house and not the backyard, leaving Wood as owner of the backyard property and free to sell it to whoever bought the house.


Wood told CBC News he didn't realize he owned the backyard until a year ago when he received a tax bill.

"I was like [Manning]," Wood said. "When I bought the property, I thought I bought everything."

He remembers receiving a second deed months after the purchase, but said he didn't pay any attention to it because it showed the land he had purchased.

Wood said he didn't make any money on the sale of the backyard to Manning. He used the money to pay legal fees and taxes.


George White, managing partner of Patterson Law, said he was pleased the matter was resolved but could not comment further.

"We are appreciative of the co-operation of our client, and the real-estate agency, both of which worked together with us to resolve Mr. Manning's concerns," he said.

Manning, though, said there's one more step: a local surveying company has offered to review the situation and possibly survey the property.

"I want to make sure this doesn't happen again to someone else," Manning said.
Posted by Team