How to Handle Going Back to Work After the Holidays 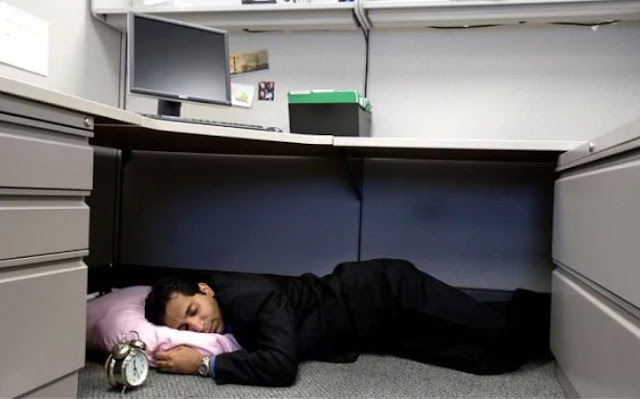 What are the odds that you'll wake up every morning this week, open one eye and think: ‘Why on earth is my alarm going off in the middle of the night?’

Then: reality will strike. Christmas is over. The new year has dawned. No more duvet days in your pyjamas, watching TV and browsing the sales online.

You actually have to work.

It’s enough to strike terror into even the most enthusiastic employee. Over the past few weeks, if you’re lucky, you’ve been in hibernation - living in a bubble, full to the brim with Celebrations and left-over feasts. You’re in so deep that there’s practically a fortress of food surrounding you.

So now what? How do you break down this self-imposed wall and return to reality? Especially when you feel like you’ve just rediscovered that Father Christmas doesn’t exist?

The first step is to embrace the blues. Because they’re not your fault. Researchers have found that the negative emotions associated with the end of the festive period, plus two weeks of irregular sleep patterns (not to mention irregular breakfast patterns) can throw our body-clocks out of synch and make us feel jet-lagged.

Returning to our normal routine of early nights and waking up in the dark can induce what’s been dubbed ‘social jet lag’. Symptoms might include: feeling sluggish, struggling to sleep, indigestion, loss of appetite, difficulty concentrating, memory problems, clumsiness, lack of energy and general fatigue.

(Of course, one way to negate these side-effects is to stick, as far as possible, to your normal waking hours over Christmas and New Year. But that ship has probably sailed).

The main thing to remember is that you will display some strengths and some weaknesses during your first days back at work. Start gently, by all means – unless you’re the kind of person who hits the ground running and is in the work gym by 6am on day one - but don’t use the period post- festive break as an excuse to slack. It won’t look good.

Instead, acknowledge where your dwindling energy will be best channeled to get 2018 rolling.

Being honest with yourself is half the battle and will mean you don’t end up feeling frustrated, or letting others down.

Part of this is accepting that you will have devote a chunk of time to tackling your email inbox. A thankless but necessary task. If your entire office had a two week break, you might be lucky enough to be in the triple figures.

But for many, trawling through an inbox that looks more like a war zone than anything, can take the best part of a day. Plus, you’ll probably send more internal emails than usual to colleagues this week.  After all, no one wants to be accused of slacking.

Once you’ve shouldered this, it’s easier to prepare for the week ahead.

Mediacom CEO Karen Blackett told me she gets into the right frame of mind for the first days back after the festive period by: “Going through my schedule for the day ahead the night before and trying to go to sleep at a decent hour.

"Starting the day with a green juice, getting into the office an hour before normal and then blocking out an hour in my schedule during the day for emails and internal catch ups.

"I also drink lots of green tea and use an aromatherapy oil roll on my pressure points when I start to lag”.

Founder of networking organisation Cityparents Louisa Symington-Mills agrees that a little, gentle, preparation can take much of the pain out of going back to work in those first few days.

“Be organised the night before – choose your clothes for the next day, find your train pass and work security pass, step away from the wine and cheese and go to bed early,” she explains.

“Try to arrive at your desk in the morning with all the positive mental attitude you can muster. Don’t grumble about the end of the holidays, or get overly caught up in your colleagues’ stories of insane parties or hilarious new year’s resolutions; focus on the year and opportunities ahead, and remind yourself why you enjoy your job (and if you really can’t remember, perhaps now’s the time to look for another).”

Whether you look for a new role, or take up a hobby – it’s a good idea to think about something new as you head back to the office. You’ve just had a glimpse into a world where work wasn't the be all and end all. Try to capitalise on this objectivity.  Burying your head in the sand won't bring Christmas back.

“I certainly think stretching yourself mentally is vital, if we are to keep feeling alive and alert. But personal goals don’t have to be overly ambitious. The key is to be realistic. The sense of failure can be a downer, diminishing rather than enhancing your sense of self-worth.

"Push yourself just that bit further than you think you can possibly be stretched, but don't look to a goal to 'reinvent' yourself, necessarily - because just like massive crash-diet weight loss programmes, they can be doomed to failure and recidivism.”

What’s more, our creative juices flow more after returning to work, when our brains have been in a state of relaxation – unhampered by rules, regulations and office politics.

That’s something to take advantage of, whether you throw yourself into brainstorms, present a new idea to your boss or channel it into something extra-curricular that will boost your overall productivity.

And finally, remember that everyone is in the same boat. Some people even went back to work earlier than you. Only Father Christmas can get away without making a to-do list until next December rolls around.
Posted by Team