Bells of Peace on Remembrance Day 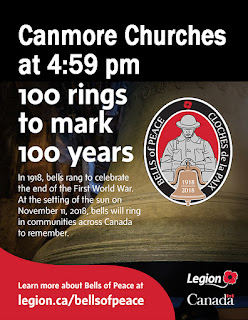 On November 11, bells will ring out across Canada to mark 100 years since the end of the First World War.

In Canmore both the Ralph Connor Memorial United Church and Saint Michael's Anglican Church will ring their bells 100 times, at the going down of the sun 4:59 pm.

The ringing of bells emulates the moment in 1918 when church bells across Europe tolled as four years of war had come to an end.

On November 11, 1918 … church bells rang out spontaneously across the country to celebrate the signing of the “Armistice.” After four brutal years … and so many young men and women dead or injured…the First World War was officially over.

One hundred years ago, relief and joy swept our land. On November 11 at sundown in Canmore at 4:59 pm Ralph Connor Memorial United Church and Saint Michael’s Anglican Church will commemorate Armistice 100.  We will mark the occasion through the Royal Canadian Legion Bells of Peace ceremony.

On November 11, 2018 … our bells will toll 100 times. With each peal, we will remember the close to 66-thousand Canadians and Newfoundlanders at that time, who were killed in the First World War … the 172-thousand wounded … and the countless others who suffered invisible yet painful wounds.

This Ceremony will be happening at sunset (local time) across Canada, United States, Europe and
When you hear the bells toll on November 11, take a moment to pause and remember all those who served and sacrificed.

We will remember them.

For services in Canmore on November 11 please visit https://canmorelegion.ca/remembrance-day/

Belgium, a human chain was formed on the waterfront with 6000 people linking hands. The chain was 21 km long. Small boats with the name of a person who died during the war were sent out to sea.

Paris, Tribute to the sacrifice made by war animals is marked by a monument. 1.1 million horses died in the great war.

On 11 November there will be a series of events to mark the centenary of the Armistice, including a commemorative service at St Symphorien Cemetery near Mons, Belgium, where the war began in 1914 and where the first and last casualties of the battle lie.

The National Service of Remembrance at London’s Cenotaph will follow traditional lines, as it remembers the fallen of all conflicts, but the march-past which follows will be expanded.
During the day, church and other bells will ring out as they did at the end of the First World War, and government funding is supporting the Central Council of Church Bell Ringers to recruit 1,400 ringers – the number lost during the war.

The day will end with a service at Westminster Abbey, London, along with others in Glasgow, Cardiff and Belfast, to give thanks for peace and those who returned.

4 ways to keep your Poppy on your jacket.

1. Use the pin to go through the material of your jacket then back through the leaf of the poppy.
2. Use a pencil eraser end or an earing back to put on the end of the poppy pin.
3. Glue the black centre of the poppy onto an old fan pin and use this to hold your poppy on.
4. Purchase the new Poppy with better a clip on it.

You can also purchase a digital Poppy that you dedicate to someone who embodies the values they fought for. https://mypoppy.ca/