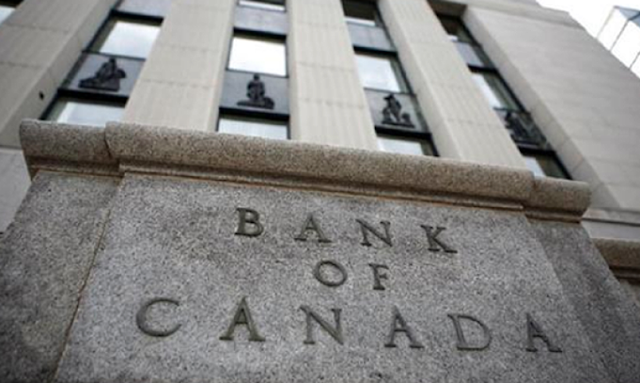 The Bank of Canada left its interest rate unchanged today and says the timing of future hikes will depend on factors such as how long the oil-price slump lasts, how well business investment picks up its pace and how much room the economy still has left to grow.

The central bank is holding its trend-setting rate at 1.75 per cent in a decision that follows a quarter-point increase at its previous policy meeting in October.

The bank has been on a gradual rate-hiking path for more than a year thanks to a strengthening economy and has already raised the benchmark five times since the summer of 2017.

The bank says it will keep a close eye on the evolution of several recent developments as it considers the timing of its next rate hike — including a steep slide in oil prices that it predicts will reduce activity in Canada’s energy sector.

It also says recent data show that the economy has less momentum heading into the final quarter of 2018 related to factors such as a drop in business investment that the bank largely connects to trade uncertainty last summer.

The bank also notes it will be watching for positive developments such as signs the economy can still expand without stoking inflation.

The central bank can raise the interest rate to prevent inflation from climbing too high. Many market watchers had expected governor Stephen Poloz to wait until at least January before his next rate increase.

The Bank of Canada has estimated it will no longer need to increase the interest rate once it reaches a level of between 2.5 per cent and 3.5 per cent, but Poloz has said this destination range remains “sufficiently uncertain” and could move up or down.