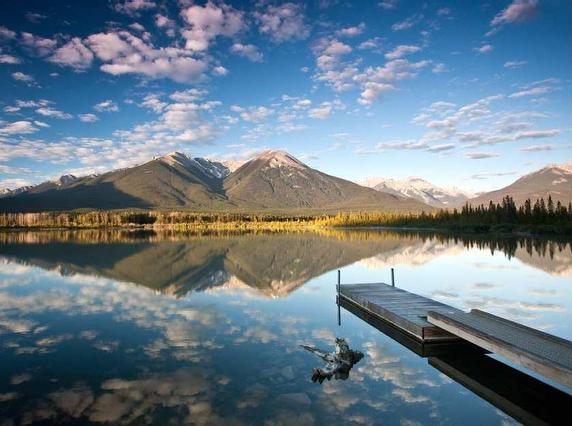 Story and Photos by Andrew Penner

I’m standing, trigger finger on the shutter, on the reedy shore of an idyllic Rocky Mountain lake. A layer of milk-white mist hovers over the water and conceals a loon making its haunting call. Moments later the bird slices through the fog and lands like a perfect pontoon plane on the glassy water. The sublime scene is playing out on little-known Herbert Lake just north of Lake Louise on the Icefields Parkway; one of many awesome lakeside locations where nature photographers can capture a card-full of postcard-worthy images.

Lakes and mountains go together like cake and ice cream. Beer and nachos. Wine and cheese. The perfect pairing is responsible for millions of visitors — record numbers are predicted this year thanks, mainly, to our dipping dollar — flocking to Alberta and British Columbia for a little sightseeing … and whatever else comes with that.

For many people, myself included, what comes with that is a penchant for pictures. That is, creating beautiful and dramatic (hopefully) imagery that does some justice to that winning combination of water and rock. Throw some rich colours into the mix — deep forest greens and otherworldly baby-blues, for example — and you’ve got the makings for eye-popping images. A loon? A moose? A beaver? Indeed, complete your masterpiece with a prized wildlife subject and, cha ching, that’s why shutterbugs get up at 5 a.m.

If the goal is capturing the beauty of our mountain lakes, there are a multitude of choices. And they come in all shapes and sizes. Here are my top 10 choices to get your iconic “cake and ice cream” shot.

Moraine Lake: Clamber up the rock pile at the east end of Moraine Lake for sunrise and you are in for a breathtaking spectacle. As the Valley of the Ten Peaks is washed with morning light, the ice-scoured mountains reflected in the baby-blue lake, you’ll see why this scene, depicted on the back of our $20 bill for years, is considered sacred and sublime.

Lake Louise:  True, you won’t be alone on the tidy shore of Lake Louise as you jockey for position at sunrise. However, the early start is always rewarded. An image of this lake is, for many millions of visitors, the ultimate “Canadian” keepsake.

Waterton Lake:  I’ve always thought that the regal position of the historic Prince of Wales Hotel on the exposed bluff high above Waterton Lake is as impressive and iconic as it gets. In fall, when the colours explode around the lake, it’s a jaw-dropping sight. And an awesome picture.

Vermilion Lakes: Getting great landscape images doesn’t get much easier! The entire stretch of lakeside road, which runs below and parallel the Trans Canada Highway just minutes from downtown Banff, affords numerous photo ops of Mount Rundle, the Fairholme Range, and more.

Lake O’Hara:  A little more work is required to get to Lake O’Hara, but the effort will pay off in spades … and many, many pictures. Reserve a seat on the shuttle and you’ll be transported into mountain-and-lake heaven. The hike up to the Opabin Plateau, where the larches burn bright in fall, is a must.

Peyto Lake: This roadside stop on the Icefields Parkway is tour bus staple … so bring some patience. The spectacular view from the platform — and the subsequent images — is mandatory for any serious landscape photographer who wants to capture the creme de la creme.

Emerald Lake: One of the crown jewels of Yoho National Park, Emerald Lake (if you’re looking for a splurge, a stay at Emerald Lake Lodge will not disappoint), might be the ultimate lake for a paddle … or a picture. Hemmed in on all sides by towering peaks, this pristine lake is always worth the 20-minute side trip off the Trans Canada Highway near Field.

Pyramid Lake: Just a few minutes from the Jasper townsite, Pyramid Lake — and the beautiful sight of Pyramid Mountain reflected on the smooth surface — is a shutterbug’s dream. Like to shoot the critters? Pyramid Lake Road serves up frequent wildlife sightings.

Herbert Lake: While 50, or more, people might be gathered along the shore of Lake Louise for sunrise, chances are only a handful, if that, will be at Herbert Lake. This little-known lake just minutes from Lake Louise on the Icefields Parkway serves up stunning morning reflections of Mount Temple and surrounding peaks. Next time take the road less travelled.

Maligne Lake/Spirit Island: The legendary image of Spirit Island — made famous when the shot was plastered on the wall of New York’s Grand Central Station for a Kodak ad — is vintage Canadiana. Unfortunately, if you take the 90-minute boat ride, you only get 15 minutes to photograph the “cake.” Use your time wisely!


Andrew Penner is a freelance writer and photographer based in Calgary.
You can find him at http://www.facebook.com/andrewpennerphotography
Posted by Team