Down payment help: What parents, kids should know before money is gifted

High real estate prices and new mortgage rules designed to clamp down on risky lending have made it harder than ever for first-time buyers to own a home.

Desperate to break into the housing market, cash-strapped millennials are accepting massive financial help from parents in the form of “gifted” down payments.

The latest stats from Mortgage Professionals Canada show down payment gifts from parents have doubled since 2000 — going from seven per cent in 2000 to 15 per cent for homes purchased between 2014 and 2016.

“With the way the market’s gone over the last two or three years, there has been quite a surge in gifted down payments from family members,” said Toronto mortgage broker Darin Bauer of Mortgage Intelligence.

Vancouver mortgage broker Atrina Kouroshnia has also seen down payment help in the six figures. She hasn’t crunched her 2016 down payment numbers yet, but tells us half her clients who put at least 20 per cent down in 2015 had a portion of their down payment that was gifted, compared to 37.5 per cent of those who put less than 20 per cent down.

She and Bauer expect the trend to continue. James Laird, co-founder of RateHub (a site that compares mortgage rates), predicted earlier this month to Global News that 2017 will be “the most difficult year for a first-time homebuyer in the last [decade].”

The new stress test — designed to predict whether homeowners could shoulder their debt if interest rates or their personal finance situation were to change — means many of Kouroshnia’s first-time buyers who were previously approved for a high-ratio mortgage (which is when the down payment is less than 20 per cent) are completely out of the market now.

That won’t get them much in Vancouver, where the average home cost more than $1.4 million in 2016. Kouroshnia thinks larger down payments will be the solution for some to “fill in the gap.”

What parents should consider

Bauer believes many parents refinance their homes to help their kids with down payments, which he thinks is very risky.

Even though they may think their house is worth a certain amount of money, if the market “corrects,” he explains, the price of their own home may go down and they will be on the hook for the equity they took out of it.

“The main thing people forget, is until you actually sell and cash out, you don’t have that money yet.

If generous parents opt to sell stocks or mutual funds to help their kids come up with the money, they could face a hefty tax bill depending on the amount. If they borrow the money, they will be charged interest and need to have a plan to pay it back.

Sometimes there are “unspoken family rules,” Kouroshnia tell us, where the child feels compelled to somehow return the money to his or her parents.

Lenders frown on money being lent rather than gifted “because it increases the borrower’s debt-to-income ratio,” Kouroshnia explains on her blog.

Another option is to sign as a guarantor on a child’s mortgage. There needs to be a lot of trust for the child if parents choose that route, cautioned Vancouver financial adviser Kristine Skinner of BlueShore Financial last May.

“You want to have an in-depth conversation with your children about what their monthly budget looks like,” Skinner said, “and their ability to absorb any unforeseen expenses and ensure that they’ve actually built that into their budget before agreeing to help them.”

Mortgage payments are only part of the cost of home ownership. Property taxes, utilities, insurance, condo fees, maintenance costs and emergency repairs all add up.

And Bauer points out property taxes and utility rates are only going up in already pricey markets like Toronto. Being house poor is not something anyone should strive for.

What first-time homebuyers should know

The first rule of accepting a gifted down payment is that it has to come from an immediate relative.

It’s also supposed to be a “genuine gift” that never has to be repaid, according to Karine LeBlanc, a spokesperson for Canada Mortgage and Housing Corporation (CMHC).

The family member gifting the money may be required to sign a letter confirming that. The lender might also verify bank records to confirm the amount of funds being transferred to the buyer.

If you’re buying a property with your partner, you might want to consider protecting the money you receive from your family.

Toronto family lawyer Andrew Feldstein says any gift that goes into a matrimonial home is subject to being divvied up, even if there’s a letter stipulating who the gift is for.

“Absent a pre-nup, you’re out of luck,” Feldstein warned.

He adds you can get a “single issue” pre-nup (which may cost you a couple thousand dollars) even after you’ve already tied the knot.

For self-employed applicants who are stating their income, Kouroshnia tells Global News, at least five per cent of the minimum 10 per cent down payment would need to come from the buyer’s own resources.

Something else to consider is that even with a gifted down payment, a lender will look at any prospective buyer’s complete financial picture. Good credit is always important.

“If the client has poor credit, no stability with income, and is getting the down payment 100 per cent as a gift, it would be hard for the lender to accept their mortgage application and may ask to have the parent on board as well,” she said.

Jeanette Brox, a senior financial consultant with Investors Group, says the best way to save for a down payment is to maximize RRSP contributions and put the resulting tax refunds toward a down payment fund.

Under the Home Buyers’ Plan, the government lets each first-time homebuyer make a one-time $25,000 RRSP withdrawal that can be used for a down payment. If you plan to buy property with a partner who’s also a first time buyer, that’s $50,000 right there.

You’ll have to repay the funds you took out of your RRSP within 15 years, starting two years from when the money was withdrawn. 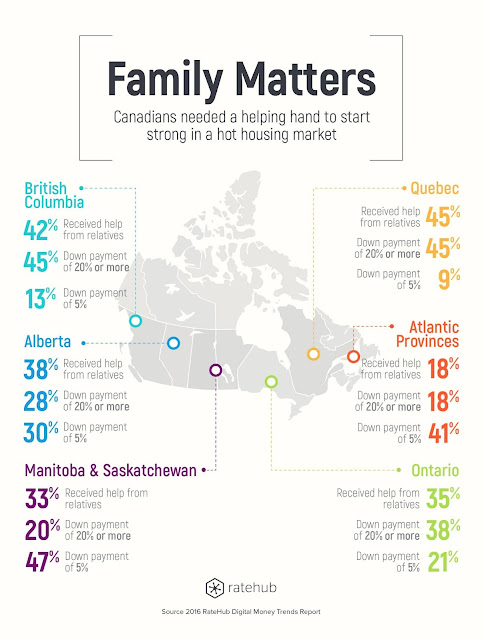