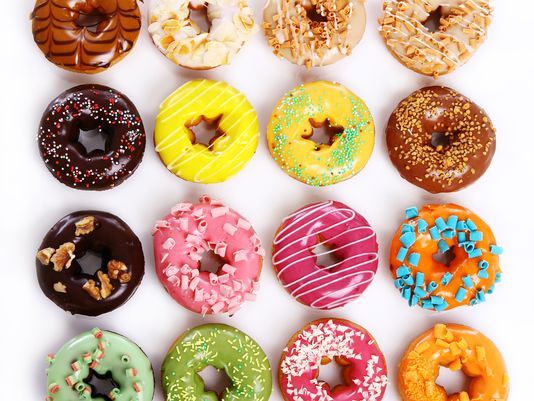 There are more doughnut shops per capita in Canada than anywhere else on the planet. Canadians eat more doughnuts than any other country's citizens. Although the doughnut is often seen as an American icon, it has become Canada's unofficial national snack. Coffee and doughnuts go hand in hand. And since coffee is Canada's number one beverage, its partner in crime, the humble doughnut, ranks up there in popularity.

Japan comes in a close second with a huge population of doughnut lovers.
National Doughnut Day is held on June 3 each year!

What is your favorite type of doughnut? Is it glazed? Maybe Boston Cream? Well, according to Standard-Freeholder.com, they listed what the most popular doughnuts are in Canada.


10 of the world’s craziest doughnut flavours

They’re delicious at any time of the year. We all have our favourites, whether it’s a maple dip, a chocolate glazed, or the traditional sour cream. Yes, the doughnut is the little snack that everyone loves to eat by the dozen. (Tip: a “cake” doughnut is thick and has a cake-like texture and a “raised” doughnut is fluffy like those chocolate glazed ones.)

Every year, you hear about some baker out there who’s invented some new flavour to tempt your taste buds. Here’s 10 of the craziest ones:

You’ll have to go all the way to Voodoo Doughnuts in Portland, Oregon, to get this yummy donut covered in icing and… you guessed it, Captain Crunch cereal! Soft and crunchy at the same time, dessert and breakfast in one snack. Yum! 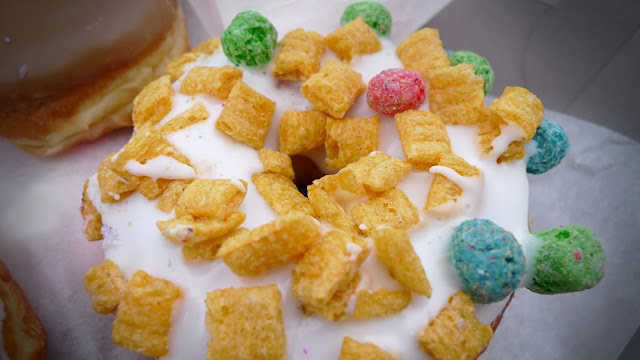 Another great creation from Portland’s Voodoo Doughnuts, they call this one the “No Name.” And I can imagine that’s it’s hard to describe in just one or two words a delicious raised doughnut covered in chocolate frosting, peanut butter, and Rice Krispies cereal! 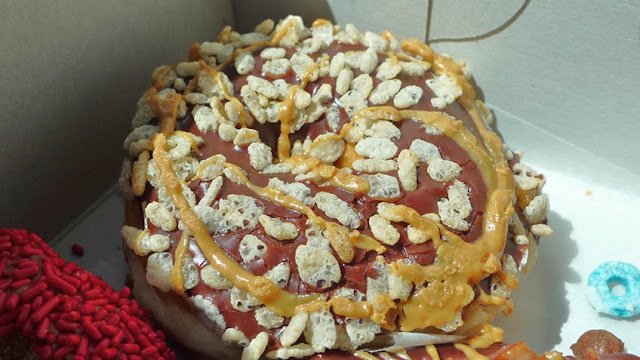 From the west coast over in Washington state we head over to Frost bakery where they make this ooey, gooey, stick to your fingers White Chocolate Raspberry cake doughnut. It sort of looks like a candy cane! 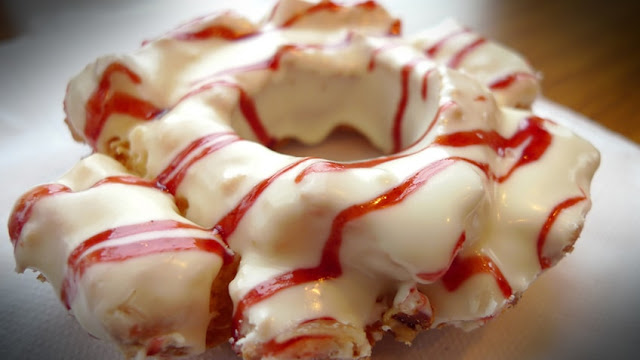 If you happen to be visiting Campbell, California, drop by Psycho Donuts (pretty cool name) and check out their Raspberry Road Rash cake doughnut which looks super tasty - cheesecake icing and raspberry dust! 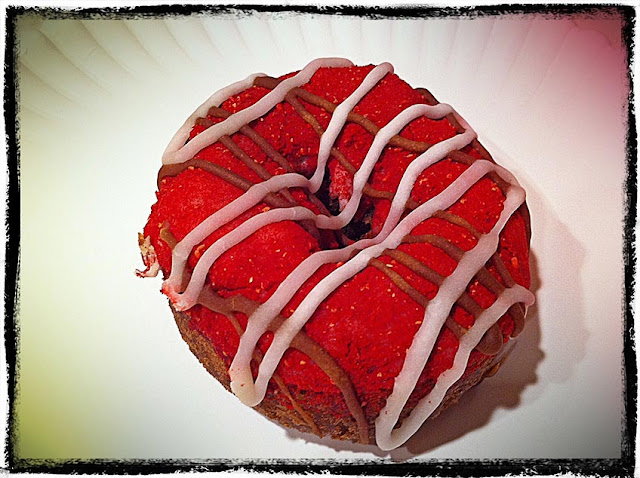 This one is a strange looking square shape and it’s covered in tart key lime pie-flavoured icing and glaze. Makes your mouth go all puckered! 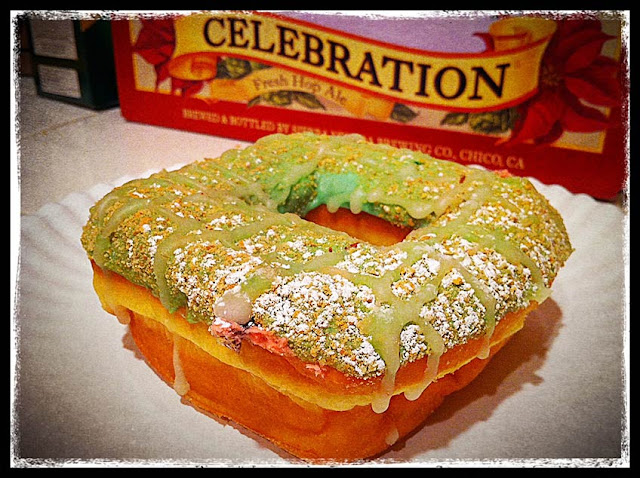 You’ll have to head over to Austin, Texas, to get the Flying Pig doughnut from Gordough’s. This place is famous for their doughnuts and that’s all that’s on their menu - sandwiches, burgers, and full meals made with the delectable cakes. This one is covered in bacon (lots of it) and maple icing. Next time you’re in Florida, before you head out to all the big amusement parks or see Mickey and Minnie, head over to Tom + Chee in St. Petersburg. Their motto is “Eat What’s Fun!” and you can tell they take it seriously with their signature creation, the Grilled Cheese Doughnut. 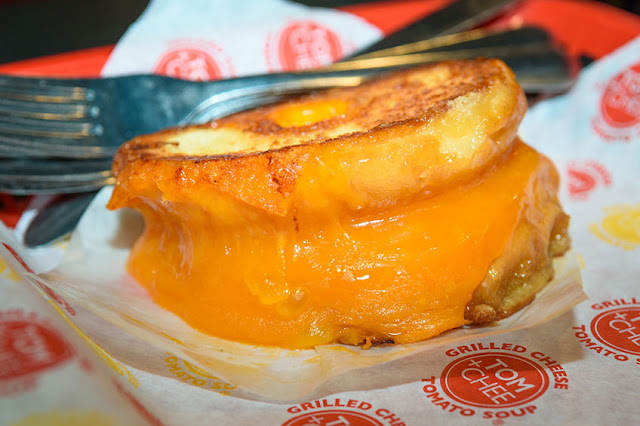 This little creation from Lucky’s in Vancouver, BC, was created to raise funds for the 2013 Aprons For Gloves “Restaurant Rumble” annual event that raised money for the Eastside Boxing Club which offers boxing and mentorship programs for underprivileged youth. Shaped like a boxing glove, it was filled with mango/passion fruit curd and topped with a red raspberry glaze. What a tasty way to help out! 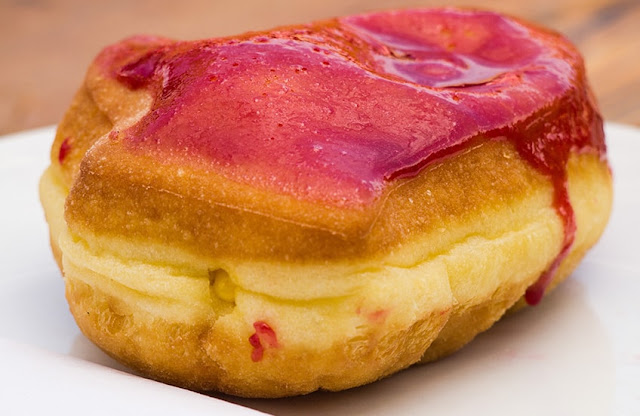 Wow, this Voodoo Doughnut place really makes some incredibly wacky snacks? Who would have thought to put vanilla frosting, bubble gum dust (you can get gum dust?), and a piece of bubble gum on a raised donut! I wonder if you can blow bubbles after you eat this one. 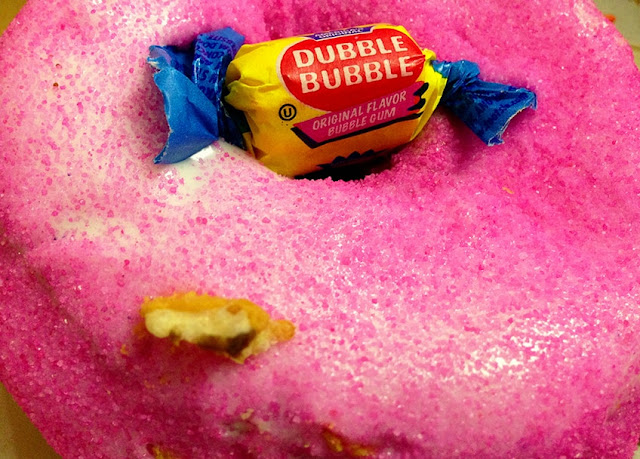 For this last one we head way over to Korea where they have the popular Dunkin’ Donuts chain (kind of like our Tim Hortons). This doughnut is filled with kimchi, a traditional fermented Korean dish made of vegetables such as cabbage, and seasonings. 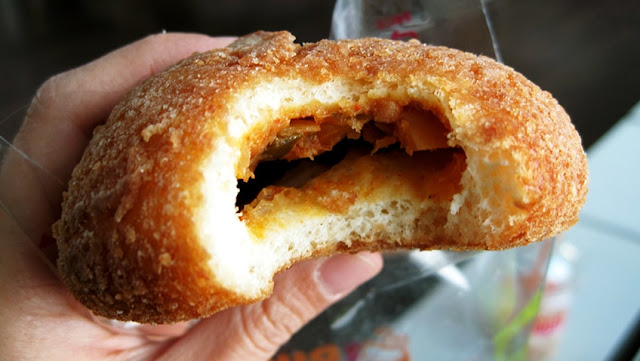