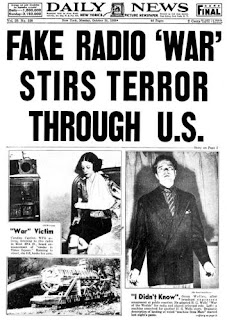 "Ladies and gentlemen, we interrupt our program of dance music to bring you a special bulletin," the broadcast began. "Martians have landed in New Jersey!"

"At 8:50 p.m., a huge flaming object, believed to be a meteorite, fell on a farm in the neighborhood of Grovers Mill, New Jersey," the announcer stated.

The Halloween Broadcast of The War of the Worlds was aired on October 30, 1938.   Those that missed the announcement that it was a radio play and tuned in after thought it was real news and that this was a real alien invasion.  Neighbours in the area of the alleged landing were arming themselves and heading down to Grover’s Mill to assist and defend themselves from the impending attack.  Other listeners packed up all their things into their cars and fled the immediate vicinity. During the fleeing, many cars accidently crashed into each other, and many people were killed or injured.

The way the broadcast was played out made it seem real to the listeners. 80 years later many people believe that the newspapers sensationalized the reaction of the people listening to the broadcast.

The War of the Worlds was a good story that scared many people, and that is what Halloween is all about! 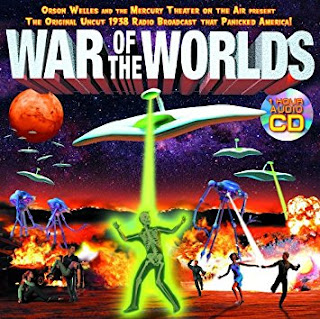 Listen to the full episode of “War of the Worlds” at
https://www.youtube.com/watch?v=Xs0K4ApWl4g