Early Snow in the Mountains 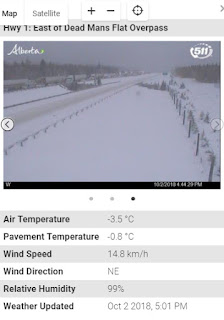 Some of you are jumping up and down in anticipation of an early ski season.  Others are cursing the snow gods and wishing the snow away.  Either way you feel, we are in the midst of the first major snowfall of the year and we are expecting more. According to Environment Canada we are under heavy snowfall warning. It is expected to stop by morning.  We may have even beaten the 1995 record of 10.0 cm for this day October 2.  At this time in a backyard in Canmore there is 20.0 cm.

For those that are driving the roads are slick. As of this writing, the Trans Canada Highway has been closed for 6 hours due to major accidents. In Calgary between midnight and 9:30 am there were 103 collisions reported. Edmonton is sending snowplows and sanders to Calgary to help with the load and they have hired snow plow contractors to assist as well. As many as 80 public transit busses were either delayed, had to change routes or got stuck and could not continue their routes. (CBC News)

If you are in the Bow Valley and want to check the road conditions with live reports there is a Facebook group called Bow Valley Road Conditions.  This wonderful group posts up to the minute conditions live from group members.

If you are staying home remember that your muscles are not used to snow shoveling.  Be careful and take it slow while you clear the snow off your decks, walks and driveway. Don't forget to watch for heavy branches that are under snow load and could break off.

The best course of action until the morning is to stay put, keep warm and stay safe. 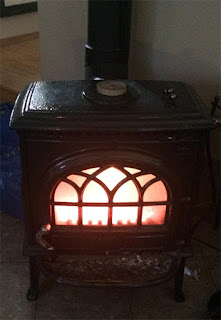