Jim and Jordy in the News 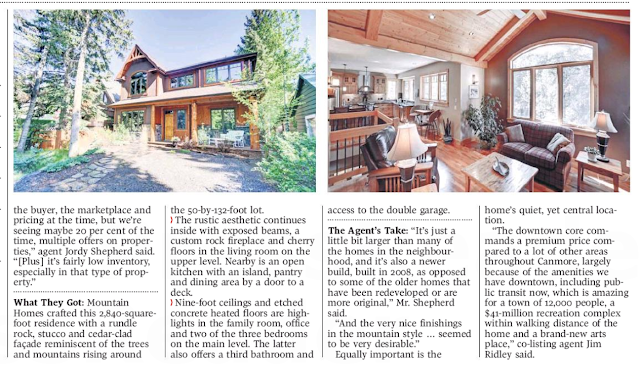 The Action: Some luxury residences in Canmore took a good deal of time to sell earlier this year.  But this builder’s own home had two offers within two days in June despite hosting only a handful of visitors – including curious neighbours.  “It depends on the property, the buyer, the marketplace and pricing at the time, but we’re seeing maybe 20 per cent of the time, multiple offers on properties, agent Jordy Shepherd said.  “[Plus] it’s fairly low inventory, especially in that type of property.”

What they Got:  Mountain Homes crafted this 2, 840-square-foot residence with a rundle rock, stucco and cedar-clad façade reminiscent of the trees and mountains rising around the 50-by-132 -foot lot.

The rustic aesthetic continues inside with exposed beams, a custom rock fireplace and cherry floors in the living room on the upper level.  Nearby is an open kitchen with an island, pantry and dining area by a door to a deck.
Nine-foot ceilings and etched concrete heated floors ar highlights in the family room, office and two of the three bedrooms on the main level.  The latter also offers a third bathroom and access to the double garage.

The Agent’s Take: “It’s just a little bit larger than many of the homes in the neighbourhood, and it’s also a newer build, built in 2008, as opposed to some of the older homes that have been redeveloped or are more original,” Mr. Shepherd said.

“And the very nice finishings in the mountain style … seemed to be very desirable.”  equally important is the home’s quiet , yet central location.

“The downtown core commands a premium price compared to a lot of other areas throughout Canmore, largely because of the amenities we have downtown, including public transit now, which is amazing for a town of 12,000 people, a $41-million recreation complex within walking distance of the home and a brand-new arts place,” co-listing agent Jim Ridley said.

Boys just wanna have fun, the other side of your favourite Real Estate Team.

Below: Drew Betts, Jordy Shepherd & Jim Ridley. Royal LePage fundraiser give a kick out for the YWCA Walk a Mile in Her Shoes in Canmore on Friday (Sept 15). 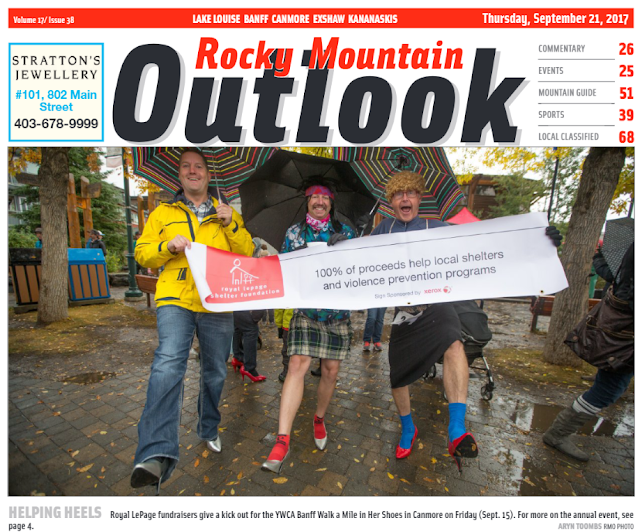